Finally after a whole month of hard work looking for a new place to live and emptying the castle I am leaving behind, I have some time to catch up with my blog.

“It’s not surprising that legends swirl around apartment houses designed by James Francis Dunn. With their undulating, cloudlike facades and lion-headed brackets, his buildings are among the most picturesque and provocative in San Francisco, and the most redolent of the grand boulevards of Paris.” (SF Chronicle)

Two and a half years ago, I arrived to one of Francis Dunn’s houses in search of a new home in San Francisco, and life gave me the opportunity to inhabit such. The McAllister House, one block North from Alamo Square saw me coming as a young woman named Cristina, and this week sees me leaving as a much more mature woman: Isabel. Great changes took place under the influence of French Renaissance architecture.

“The sinuous, wrought-iron balconies on 1347 McAllister St., it is said, were copied after the boxes inside the Paris Opera. Dunn’s client hoped to please a beautiful diva. When she dropped the love-sick swain, the story continues, in fury he turned the place into a bordello.”

Guardians of our dreams

“A Dunn building is likely to have curves everywhere — in bay windows, wrought-iron balconies that often integrate the fire escape into their designs, and window mullions. Decorative detail abounds — cartouches, shields, drips of all sorts, women’s faces, bearded men’s heads, eagles or phoenixes holding up balconies and cornices. 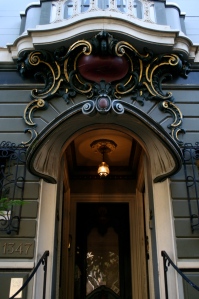 Many of Dunn’s buildings have a broad, heavily ornamented cornice at the top — and another above the first floor, to set off the building’s entry from its living floors.

“Weirdo,” an architectural surveyor for the Junior League wrote in 1977 about one Dunn building. “Especially the lions’ heads.”

But fans don’t agree. What sounds on paper like excess comes across in reality as stunning, thanks to Dunn’s compositional skills and taste.”

Living in a Dunn’s building was an honor. Amazing views from the living room also known as the hall of mirrors made each gathering in this space celebratory. The oval windows witnessed everyone’s story. 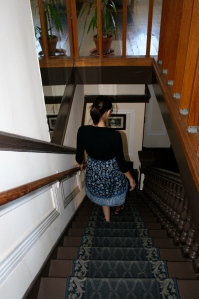 Walking the steep stairs reminded me of my muscles, and always made me aware of the grandness (and sacrifice) of living in a house with high ceilings.

The interior of the house is filled with beautiful plaster ornaments such as a big start surrounding a chandelier, wooden details around the stairs, etc.

A chandelier detail that witnessed my dreams for seven months

Who said that designing from the inside out was a new concept? Dunn practiced such concept with rooms opened to the outside world, such as the living room and the guest area which point toward City Hall.

Dunn was “born and raised in a working-class, largely Irish South of Market neighborhood by a widowed mother, he was self-taught as an architect — but remarkably well taught. He mastered Parisian architecture by studying the latest journals. In later years he traveled throughout the United States, and probably in France, and his work was always up to date, reflecting current trends in New York and Paris.”

1347 McAllister was finished in 1902 and says au revoir to my life in 2010. Now I must seek new inspiration in the vibrant neighborhood of the Mission.

Error: Twitter did not respond. Please wait a few minutes and refresh this page.